Are you aware of some of the current youth injury prevention guidelines for baseball and softball players? 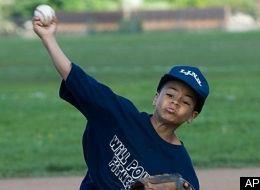 Although baseball and softball are some of the safest sports for kids to play, parents and coaches should still be sure that youngsters are properly trained to avoid getting hurt in the field or batter’s box. In addition, guidelines adopted by the American Academy of Pediatrics last year emphasize the importance of keeping an automated external defibrillator (AED) nearby and having protective equipment that fits well.

While injuries are infrequent in youth baseball and softball compared to other sports, those that do occur are more likely to be severe, such as broken bones and concussions. Still, catastrophic, life-threatening injuries are very uncommon, occurring in the range of about one per one million participants each year.

But one of the most concerning risks, and a growing one, is that kids are stressing their arms too often and learning new skills before their bodies are ready to take them on.

These published guidelines address injury prevention through equipment and teaching — as well as moderation when it comes to growing athletes.

The youngest Little Leaguers, in particular, should use lower-impact balls, wear face guards on their batting helmets, and use protective eyewear. Batting gloves and rubber spikes (instead of metal ones) are also recommended, as are cups for boys.

Despite interest in safeguarding kids’ hearts, there is no evidence that chest protectors can prevent injury or death, specifically when heart rhythm is deranged after a ball hits the chest, according to the AAP report.

All kids should be taught how to avoid fastballs coming at them in the batter’s box, or line drives hit straight back to the pitcher’s mound. As in other sports, anyone with signs of a concussion after getting hit in the head should be sidelined until seen by a doctor.

Researchers agree that the most preventable injuries, and some of the most worrisome, are overuse injuries. Pitchers, in particular, should not pitch if their arms are still tired from the last game, nor should youngsters learn new pitches like sliders and curveballs too soon. Exercises to strengthen core muscles is also important.

Sadly, it is not unusual to find talented youngsters whose throwing arms have been ruined by the excesses imposed upon them in Little league or other youth baseball programs. These otherwise promising athletes don’t even make it to high school or college baseball because their throwing arms are “shot.”

To prevent such outcomes, kids 14 and under should be advised against throwing more than 65 pitches a day, and should be pitching no more than three days a week.

Orthopedic surgeons are treating and performing more surgeries on kids that otherwise used to be typical in only older, more experienced athletes. Again, the issue is overuse. Some of these kids, whose parents or coaches who consider them up and coming “pros’ are not only pitching in one league, but pitching in multiple leagues, and then pitching on weekends in showcases. They don’t follow any limits on pitch count and are at high risk for injury or lasting damage.

For those that participate in softball, there is less evidence that pitching multiple days in a row is dangerous as opposed to baseball. This is because softball pitchers — who throw underhand — use their legs and torso more than baseball players, who put most of the pitching strain on their arm and shoulder.