Did you know that signs of artery injury are common in the shoulders of Pro volleyball players? 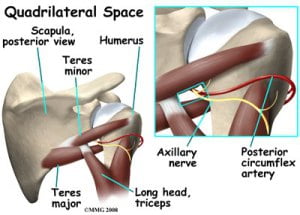 Yes, approximately one in four professional volleyball players surveyed in the Netherlands had symptoms that could suggest a potentially serious injury to a shoulder artery, known as the ‘posterior circumflex humeral artery.’

After encountering aneurysms in the shoulders of a half dozen pro volleyball players, Dutch researchers questioned 99 players to see how many more had possible signs of the same injury.

The main symptoms – cold, blue or pale fingers during or right after intense play – were reported by 27% of the volleyball players. The study did not actually examine the athletes to determine whether they had artery damage, though.

“We only did a questionnaire and we still need to relate whether the questionnaire is in accordance to a vascular problem,” said Dr. Mario Maas, senior author of the study and a radiologist at the Academic Medical Center/University of Amsterdam in The Netherlands.

Dr. Maas and his colleagues at the hospital had seen six cases of blood clots in the fingers of male pro volleyball players in the course of three years, mainly in each man’s dominant hand.

In each case, they traced the problem back to aneurysms in the athletes’ shoulders on the same side of the body and performed surgery to repair the injured blood vessel. The players were able to return to competition after a few weeks.

Daan van de Pol, the study’s lead author, said that the problems can be due to compression of an artery in the shoulder when a player is going for a smash or a serve.

The overhead reaching movement squeezes the artery “like a tube of toothpaste,” the authors reported in ‘The American Journal of Sports Medicine,’ potentially causing clots to shoot out and circulate down to the fingers. The injury has also been documented in professional baseball pitchers, they noted.

The group is doing follow-up research to see how well their survey actually identifies people with blood clots caused by a vascular problem.

In the meantime, their report urges doctors, especially those treating elite athletes, to actively screen for the signs of potential vascular injuries.

“I think the condition itself is rare, and for that reason it’s not…a condition players at a recreational level are going to experience,” said Dr. Jonathan Reeser, director of the department of Physical Medicine and Rehabilitation at Marshfield Clinic in Marshfield, Wisconsin, who was not involved in the study.

“That said, it does happen, and usually it happens in the more competitive athletes, and so for that reason you really don’t want to miss it,” he added.

Dr. Maas said that although the finger symptoms seem to be common among elite athletes, for athletes at high school or other less intense levels of competition, the risk is not high.

Still, Dr. Reeser said, “I think it’s quite important to at least keep that in the back of your mind when you’re evaluating somebody with shoulder pain or, in this case, hand symptoms. If you miss it, you could potentially have as a consequence more serious, long term deficit of function.”