Did you know that teenagers that get insufficient sleep may be at higher risk for injury? 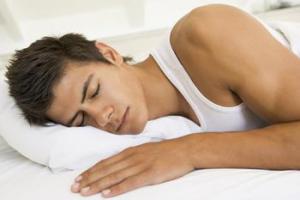 Yes, a recent study has reported that teenagers who don’t get enough sleep – especially as they move to higher grades in school – appear to be at higher risk for athletic injuries.

Teen athletes who slept at least eight hours a night were 68% less likely to be injured than athletes who regularly slept less, said lead author Dr. Matthew Milewski, formerly from Children’s Hospital of Los Angeles and now at the University of Connecticut in Farmington.

“Our study shows that everyone’s mom was right when she said you need to get a good night’s sleep. While this was felt to help you get good grades in school, we now see that it helps prevent sports injuries,” Dr. Milewski said.

Dr. Milewski and his team surveyed middle- and high-school athletes in grades 7 to 12 who were enrolled at the Harvard-Westlake School in Studio City, California, asking about the number of sports they played and the time they committed to athletic activity at school and through other programs.

The children were also asked if they used a private coach, whether they participated in strength training, how much sleep they got on average each night, and how much they subjectively enjoyed their participation in their respective sport activity.

However, gender, weeks of participation in sports per year, hours of participation per week, number of sports the teen engaged in, strength training, private coaching, and subjective assessments of “having fun in sports” were not significantly associated with injury history.

“We were surprised to find that sleep played such an important role in athletic injury,” Dr. Milewski said. “We thought that having a private coach and doing sports outside of school and doing sports more often would increase the rates of injury, not the lack of sleep.”

He cautioned that the results are based on students’ responses to questionnaires. “We did not document the actual number of hours they slept, but just what they reported to us. But our results do show that it is a chronic lack of sleep, not an acute lack of sleep like the night before a big game, that accounts for the increase in injuries,” he said.

“The demands on kids in this age group are only increasing and this can contribute to sleep deprivation,” Dr. Milewski said. “Once you become sleep deprived, it becomes even more difficult to get back on track for healthy sleep.”

“There is a lot of focus just now on injury prevention strategies. Sleep education has not been a big focus of these, but we hope that it will become more important as a result of our study.”