Do you know that adults with “flat feet” may be more likely to have chronic knee pain? 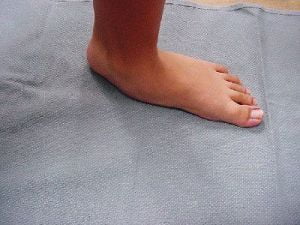 Yes! Adults with flat feet may be more likely than those with higher arches to have chronic knee pain! These are the findings of a very interesting study conducted two years ago, that still seems to have garnered little attention. Moreover, the findings raise the possibility that flat feet sometimes contribute to knee osteoarthritis.

The study, of 1,900 adults in their 50’s or older, found that those with the flattest feet were 31% more likely than other study participants to say they had knee pain on most days. And they were 43% more likely to show damage to the cartilage at the inside of the knee.

The findings, reported in the journal ‘Arthritis Care & Research,’ don’t specifically prove that flat feet caused the knee problems. More studies that follow people over time, looking at whether those with flat feet are more likely to develop knee pain or cartilage damage, are still needed to be unequivocally certain of this. Nonetheless, there is reason to believe that flat feet could be the culprit, if not a very significant factor.

For example, when your feet flatten, it can change your posture or the way you move. One consequence of this is that when a person puts weight on a flat foot, the lower leg often rotates inward, or ‘pronates’, which over time could damage the cartilage at the inner knee.

In this study, 22% of all participants reported chronic knee pain. But it was more common when the same-side foot was flat.

They measured “flatness” with participants standing on both feet, then scored each foot using a common “arch index.” Individual feet were then matched with the qualities of the knee of the same leg.

Of the flattest 1,047 feet the team examined, 30% came with a painful knee. That compared with a rate of 21% for all other feet.

When the researchers accounted for several other factors in knee arthritis risk — like age and body weight — having a flat foot was linked to a 31% greater chance of having chronic knee pain.

A similar pattern was seen when it came to cartilage damage at the inside of the knee, detected using MRIs. Such knee damage was found with 29% of the flattest feet, versus 19% of other feet.

If further studies show that flat feet do precede knee problems, then it might be possible to reduce that risk by using shoe inserts called ‘orthotics’ to support the inner arch of the foot.

All babies and toddlers have flat feet, with the arch developing during childhood, but some people maintain a lifelong flattened arch.

It’s not clear how often people might develop flat feet later in life, although it is possible that the aging process or factors like weight gain could contribute.

One recent study of an ethnically diverse sample of Americans age 65 and up found that 19% had flat feet.

About nine million Americans, more than half of whom are older than 65, have knee osteoarthritis. A 2008 government study estimated that 46% of U.S. adults can expect to develop arthritis in at least one knee by the age of 85.