Growing Concerns About The Abuse/Misuse of ‘Plyometrics’ 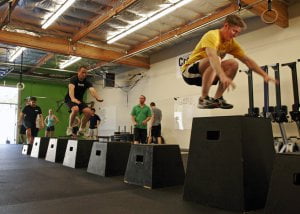 Plyometrics represent a form of exercise that has been employed over the last 30 years by elite athletes in order to promote speed, explosiveness, and faster reaction times. But more recently, plyometrics have found their way into the mainstream as a result of the wildly increasing popularity of jump filled workouts such as high intensity interval training, CrossFit, and Boot Camp classes. What has followed is an increase in injuries, particularly for the everyday exerciser.

Plyometrics is defined as any exercise in which muscles are repeatedly and rapidly stretched and then explosively contracted. Examples of this include jumping high off the ground or doing push-ups with a clap between each repetition. Playing catch with a medicine ball can also be considered plyometrics, along with skipping, bounding, and jumping. Plyometrics is believed to teach muscles to react faster. Plyometrics are believed to produce more power because the faster a muscle can contract, the more powerful it becomes. As a result, it has been a part of training for elite and professional athletes in a variety of sports, particularly those who engage in rapid stop /starts like basketball and tennis players.

Unfortunately, there is an increasing body of evidence that demonstrates that plyometrics is associated with pain and accelerated aging/degeneration of tendons, particularly when performed too frequently or improperly. The clinically painful tendons that can be produced by plyometric performance are now characterized at the microscopic level by collagen fragmentation, increased ground substance, and neovascularization of the affected tendon(s). These tissue abnormalities are believed to develop from an ineffectual healing response to the repetitive microtears within a tendon(s) that can be produced by plyometrics. The natural healing process may not be sufficiently capable of healing the repetitively strained tissue once these abnormal tendon changes develop.

Proper instruction and guidance is essential to the safe performance of plyometrics. It appears that most injuries occur when people attempt plyometrics without proper supervision and instruction. Also, a good strength base is essential before proceeding with any plyometric training programs. Because they can be so hard on the tendons even well-trained athletes are well advised to limit plyometric drills to no more than twice a week.

An increasing risk group for plyometric induced injury is the CrossFit crowd. This represents a younger population of exercisers who are willing to expend a lot of energy in the pursuit of high-end goals by following a high intensity, constantly varied exercise activity schedule that is performed several times per week.

There has been an increasing and worrisome misconception that plyometric training is somehow beneficial for weight loss. This simply is not so. Those exercise novices and overweight individuals who incorporate substantial amounts of plyometric training will encounter injury far sooner than any appreciable loss of body fat. It is far better to accomplish weight loss with other exercise/nutritional strategies before embarking on a plyometric program. Certainly, the load on muscles and tendons will be less…..and less likely to produce injury.

For the beginning to intermediate level exerciser, some guidelines for incorporating plyometrics is in order: Beginners should perform plyometrics no more than once a week, for five minutes, at low intensity. Certainly not every day. Plyometric jumps should not be performed until the exerciser is capable of performing squats in proper fashion with his/her own body weight. Whenever possible, or whenever in doubt, one should seek proper instruction before performing plyometric drills and techniques. Moreover, instruction on proper landing techniques is essential in order to avoid lower extremity, hip, and spine injuries. Activities like jumping over cones, skipping, and ladder hopping on the ground do train the neuromuscular system. They seem deceivingly simple and easy to perform. However, when performed repetitiously and at high intensity these activities have the potential to produce significant pain and injury.

In short, plyometrics can provide definite training benefits to athletes, but should be carefully integrated and performed in order to avoid potentially painful and costly problems.