Have you or someone you know sustained a “SLAP tear”? 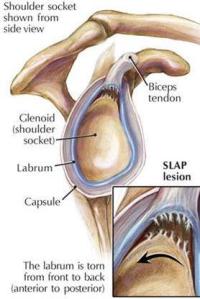 A “SLAP tear” is a crack or breach of the upper portion of the cartilage “ring” that lines the socket of the shoulder joint. It is generally caused by repetitive stress on the shoulder from sports or other physical activities. Surgery is often the treatment of choice for significant size tears. Unfortunately, in the sport of baseball, shoulder surgery rarely helps major and minor league pitchers play as well as they did before.

“However, many position players and most pitchers never achieved their prior performance,” noted lead author Wasyl W. Fedoriw, MD, an orthopedic surgeon at Methodist Hospital in Houston, Texas, who presented the findings. For pitchers who underwent physical rehabilitation, 22% were able to play as well as they previously had; for position players, that rate was 26%.

SLAP tears, first described in the literature in 1985, are caused mainly by repetitive throwing. Although surgical repair of SLAP tears is common, little has been known or studied about the effectiveness of non-surgical methods of gaining pain relief.

To better understand the effectiveness of nonsurgical treatment for SLAP tears in professional baseball players, researchers at Methodist Hospital reviewed 119 charts from a single professional baseball organization and identified 68 players with SLAP tears documented with magnetic resonance imaging (MRI). All underwent nonsurgical treatment that focused on stretching the posterior shoulder capsule in internal rotation, especially in cross body adduction. Another part involved training scapular muscles to hold the scapula in a stable position during the wind-up and cocking phases. Those who failed 2 rounds of non-surgical therapy went on to surgery.

Outcomes were defined as “return to play” for a player who played in at least 1 minor or major league game after treatment. Those who “returned to previous performance” returned to the same or a higher league and performed at their pre-injury level.

The researchers found that the presence of a partial tear of the rotator cuff worsened both non-surgical and surgical outcomes. Level of play also seemed to affect outcome; better players were more likely to bounce back to previous performance levels of play.

John E. Kuhn, MD, associate professor of Orthopaedic surgery and rehabilitation and Chief of Shoulder Surgery at Vanderbilt University Medical Center in Nashville, Tennessee, who moderated the shoulder/labrum session, says that there are several takeaway messages from this study.

“A lot of these throwing athletes can be treated non-operatively,” Dr. Kuhn said. “They had very good success with that.” He noted that patients who had surgery had a very poor rate of return to the pre-injury level of play. “That suggests that patients can throw with SLAP lesions, and that not every SLAP lesion needs to be repaired,” he said. “Many can be rehabilitated; the sources of pain or disability may not be the SLAP lesion itself,” he added.

Some surgeons might repair the tear without understanding that the problem could be adaptive. “It may be what allows the thrower to throw,” he explained. It is possible that the SLAP tear allows some throwers to get into that extreme position of external rotation, which allows them to throw. “If you fix that, you could limit their ability to get into that position, and then they won’t be able to throw hard or with high velocity again,” Dr. Kuhn said.

Dr. Kuhn described the findings as “very significant.” The research suggests that surgery in this patient population really should be a career-salvaging option, he explained. “It really shouldn’t be something you throw at somebody quickly or early. Rehab them, do everything you can to prevent surgery.”