WARNING: A pre-workout energy drink has been implicated in the death of a marathon runner. This is not the first such incident. 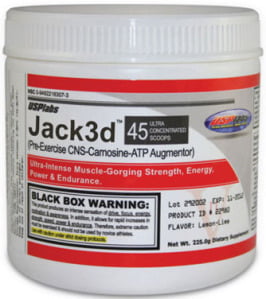 The death of Claire Squires, a 30-year-old hairdresser who died one mile from the finish line of the 2012 London Marathon, was likely caused by consuming Jack3d (USPlabs), a performance-enhancing supplement that contains the amphetamine-like stimulant 1,3-dimethylamylamine (DMAA). Taken during intense exercise, DMAA not only increases heart rate but also contractility, which has the overall effect of increasing the heart’s workload.

Jack3d was banned by the UK’s Medicines and Healthcare Products Regulatory Agency (MHRA) four months after Squires’s death. DMAA has been linked to psychiatric disorders, heart attacks, and stroke. It is banned by the World Anti-Doping Agency (WADA), and it is banned in Australia, Canada, and the US. In 2012, two US soldiers taking the supplement died of cardiac arrest while performing military exercises. Despite these bans, it is still widely available online.

According to a report in a British newspaper, the Guardian, Squires purchased Jack3d online. Her boyfriend, Simon Van Herreweg, told the newspaper that Squires took the supplement “a couple of times” before the marathon but “didn’t really get on with it.” She was hoping to break her previous marathon best of four hours and planned to take one scoop of the mixture in a drink to see if it could push her through to the end of the marathon.

It had been known that Squires also had a past medical history of irregular heartbeat, which might have made her particularly vulnerable to this supplement. However, the coroner that examined Ms. Squires does not believe that the arrhythmia played a role in her death. Squires, according to the coroner, had been an active runner for many years, something he regarded as a “stress test.” Therefore, he concluded that arrhythmia was not the fatal factor in her death in and of itself.

We advise all of our patients to view ALL of these types of per-workout boosters with caution.