What is a “trampoline fracture”? 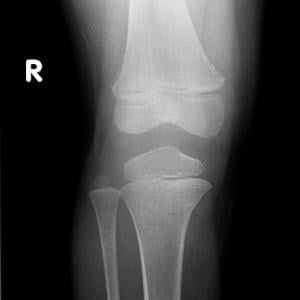 The so-called “trampoline fracture” is a transverse fracture of the proximal tibia (the “shin bone,” just below the knee) occurring in children while jumping on a trampoline (or large inflatable play structure). The fracture occurs when a second, usually heavier individual causes the jumping surface to recoil upward as the unsuspecting victim is descending. The combined excessive load causes this characteristic fracture, which is most often seen in children 2 to 5 years of age. This fracture has also been observed when a child is jumping on a bunk-bed mattress and another child pushes up on the mattress from the bunk below.

Both scenarios are not uncommon when children are playing; even when adults are present there seems to be a lack of knowledge about this type of injury. Who hasn’t attended a child’s birthday party where this very scenario is happening, especially on the popular blow-up play gyms people often rent for the day. Although this injury is not that common, still, allowing kids of all ages and weights to jump together is not a good practice. And it can potentially ruin an otherwise great birthday party.

Most injuries happen on the trampoline mat when there are multiple users present. This particular tibial fracture occurs through a phenomenon called “kipping,” whereby multiple users – jumping at the same time – causes the transfer of kinetic energy to the lightest person, thus causing them to gain greater propulsive force and height.

The mechanism of injury can be explained simply that when two masses bounce out of phase on a trampoline, a transfer of kinetic energy from the larger mass to the smaller mass is likely to occur. It is estimated that when a 176 pound adult is on a trampoline with a 55 pound child, the energy transfer is equivalent to the child falling more than 9 feet onto a solid surface. Additionally, the rate of loading on the child’s bones and ligaments is greater than that on the accompanying adult. This phenomenon does not occur with asynchronous jumping, which causes less-skilled jumpers to be propelled at unplanned angles, resulting in collisions and misplaced landings.

The x-ray of this youngster does show the unclosed growth plates of the femur and tibia. Do not confuse the growth plates with the more subtle fracture line on the upper tibia which represents the “trampoline fracture.”